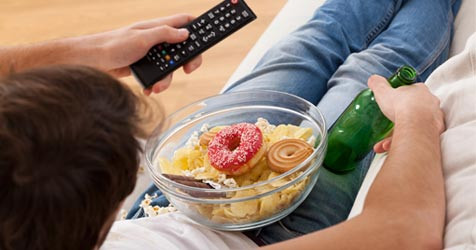 BLOOD CLOTS: RISKS OF BEING A COUCH POTATO

WHAT ARE BLOOD CLOTS?

A blood clot is a mass of blood that changes from liquid to a gel-like or semisolid state. Clotting is a necessary process that can prevent you from losing too much blood in certain instances, such as when you injure or cut yourself.

When a clot forms inside one of your veins it won’t always dissolve on its own. This can be a very dangerous and even life-threatening situation.

Deep vein thrombosis (DVT) is a clot that occurs in one of the major veins deep inside your body. It’s most common for this to happen in one of your legs, but it can also happen in your arms, pelvis, lungs, or even your brain.

An immobile blood clot generally won’t harm you, but there is the chance that it could move and become dangerous. If a blood clot breaks free and travels through your veins to your heart and lungs, it can get stuck and prevent blood flow. When it travels to your lungs, it’s called a pulmonary embolism (PE), which is a medical emergency.

Bingeing on TV box-sets could be fatal, according to the latest research. Hours of inactivity slumped in front of a television sharply raises the risk of dying from a blood clot in the lungs, say, scientists.

Participants who watched five or more hours of programs daily were more than twice as likely to die over the following 19 years than those who watched less than two and a half hours.

Researchers said those who planned lengthy television sessions should take the same precautions as those embarking on long-haul flights.

Being inactive for more than 2 hours at a stretch can cause clots in various internal organs, including pulmonary embolism and deep vein thrombosis, which need immediate medical attention or these can be fatal.

HOW TO PREVENT BLOOD CLOTS DURING INACTIVITY?

Leg immobility during television viewing may in part explain the blood clots. To prevent the occurrence of PE, researchers recommend the same preventive behavior used against economy class syndrome during airplane travel. That is, take a break, stand up, and walk around during the television viewing. Drinking water for preventing dehydration is also important. Researchers called for more public awareness of the risk of PE that can arise as a result of ‘lengthy leg immobility'.

KIMS, one of the best vascular disease treatment hospitals in Hyderabad, is renowned for its treatment of all kinds of major as well as minor blood clots that can cause serious medical problems. Our best heart specialist for blood clots treatment in Hyderabad work together as a unified, patient-centered system. Every day, we are meeting the needs of patients with extraordinarily diverse vascular and heart problems, making us one of the best vascular surgery hospitals in Hyderabad. We are uniquely qualified to offer you superb diagnostic, preventive and therapeutic services – excellence in health care in an atmosphere of compassion and caring.