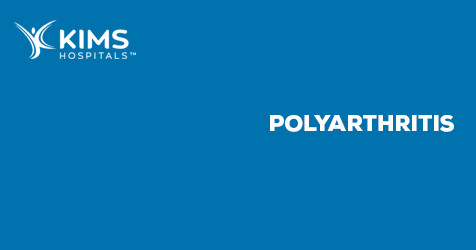 Polyarthritis is a condition where more than one joint is affected by arthritis and is also a result of autoimmune disorder. A definitive diagnosis cannot be achieved initially as it mimics symptoms related to different kinds of arthritis. This disease initially attacks the hands and the feet and then moves to larger joints slowly. There are other conditions of arthritis too that lead to polyarthritis which is although less common. They include :

These conditions mimic the symptoms of other bone disorders and hence is confusing at times in bringing out a right diagnosis. The bone treatment services in KIMS Hospitals, Hyderabad, draws out an accurate diagnosis, from a series of tests conducted which includes a physical examination, his medical history, lab tests and other scans to be surer of the polyarthritis condition.

There are certain conditions that imitate the symptoms of rheumatoid arthritis but are typically related or which would later lead to polyarthritis. Let’s take a look at them. They include:

KIMS Hospitals is the best orthopaedic centre in Hyderabad as they can make a clear diagnosis of polyarthritis despite the symptoms being so confusing. KIMS Hospitals is the best place for the treatment for Arthritis in Hyderabad as they have an experienced medical team who give a clear cut analysis without wasting your time and therefore the healing process and recovering from the condition is faster.