KIMS Hospitals celebrates yet another remarkable milestone achievement as it successfully performed first neonatal ECMO in twin states which was spearheaded by Dr Nanda Kishore (Pediatric Intensivist). Two month old baby is now stable and doing well, thanks to a team of efficient pediatric intensive care unit and cardiac surgeons of KIMS Hospitals.

When baby was born at a private nursing home in the city, he was diagnosed with Meconium Aspiration Syndrome (MAS) immediately after birth. The first feces of newly born baby is called meconium. It is not normal to pass meconium before delivery, only happens if the baby suffers asphyxia (lack of oxygen) in mother’s womb. In those circumstances baby may aspirate meconium in to the lungs making them to suffer further asphyxia after delivery. Meconium aspiration syndrome is a serious medical condition and babies may die if medical therapy not instituted promptly.

As the condition worsened within a short period of time, baby was shifted to a Children’s Hospital wherein he was put on a ventilator. However he did not respond positively and the issue further aggravated making it extremely difficult to support even on the ventilator. He was then rushed to KIMS Hospital in critical condition. Without further delay, a team of specialized doctors were formed who decided to perform ECMO procedure (Extracorporeal Membrane Oxygenation or extracorporeal life support –ECLS), a lifesaving technique providing support to patients whose heart and lungs are unable to function normally.

After four days on ECMO baby’s lungs showed significant improvement, however recovery was prolonged due to infection. He was on ECMO support for close to 2 weeks and after constant observation by the doctors and support staff, he was finally discharged from the hospital completing one month on a happy note for the entire family.

Dr.Bhaskar Rao, MD & CEO, KIMS Hospitals expressed his utmost content as he commented; “We were fully confident in treating the baby as our expertise in this field has tremendously enhanced over time. We take extreme pride in successfully rolling out our 33rd ECMO procedure which is also a significant breakthrough in the medical field of the twin states. ECMO can also be done in any age group where the lungs are severely affected e.g. swine flu pneumonia. KIMS Hospitals would like to take the lead in spreading this technology by increasing awareness among health care professionals and also the public.”

KIMS Hospitals’ ECMO program was started in the year 2012 by a group of doctors who received special training from UK. Over the past three years, the hospital was able to perform ECMO, thereby saving many patients’ lives. KIMS is the first hospital to start ECMO in united Andhra Pradesh and one of the few recognized ECMO centers in India by ELSO -Extra Corporeal Life Support Organization, an independent organization which oversees ECMO related work all over the world. The first international conference on ECMO for South and West Asia (SWACELSO) in association with ELSO was organized by KIMS in the year 2014 at Hyderabad which was attended by eminent international faculty. KIMS hospitals have conducted numerous training workshops and conferences which have helped to increase awareness. But still lot work needs to be done and KIMS hospitals will be playing a key role. 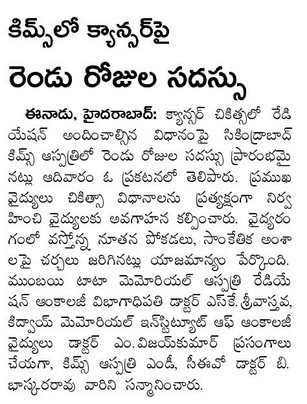